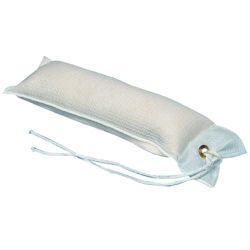 Bio-Sok not only absorbs oil, and reduces odors, but it bio-degrades the oil, as well.
It is a completely non-toxic and environmentally sound means of capturing and biodegrading the oil and fuel that leaks in the bilge and often escapes into marina waters.
Bio-Sok degrades naturally over time, and generally lasts a full boating season.
When Bio-Sok is depleted, you can simply throw away the outside fiber sleeve; there is nothing left to harm the environment.

The initial price for these products may be higher, but the net cost is lower to both the user and the environment, as there is virtually no toxic waste to dispose of.

Easy to use - just tie it in the bilge
Floats - will not sink, so it's always where the oil is
Absorbs leaking oil, and then natural micro-organisms degrade it
Ensures boat owners of a clean, odor-free bilge all season long
Environmentally safe bilge water discharge


Heavy on the technical side...
A very interesting product.
These "Bio" products technology originated as a NASA project to grow encapsulated liquid crystals in zero gravirty environments.

The products consist of a fiber sleeve containing natural soy powder "mico-ballons".
The hydophobic soy micro-spheres float, and chemically aborb petroleum products (also hydrophobic) like fuels and oils, into the center of the sphere.
The soy micro-spheres also attract naturally ocurring bacteria in the environment (seawater, etc.), which feed on the soy spheres.
As they feed, the bacteria population grows.
Now here's the cool part:
As part of their digestive process, the bacteria release enzymes into the water which, coincidentally, break down hydrocarbon molecules into simpple carbon dioxide and water.
The end result is that by feeding on the soy, the bacteria also break down the oil, which the soy has absorbed.
The oil degradation process takes a week or two depending on the type and concentration of naturally occurring bacteria, and the temperature (warmer is better), but the Bio-sok contains enough soy micro-ballons to, typically, last an entire boating season.

Applications:
Oil Spill Response - For example, Bio Oilsorb Powder can be mixed with water to form a slurry, which can then be sprayed over the surface of an oil spill on water or land.
Railroad Yards
Oil Refineries
Steel Mills
Municipalities - For example, in stadium parking lots where rain washes the oil drippings from cars into the city storm drains and bio-booms are deployed arond the sewer grates to absorb and degrade the oil, before it can get into local waterways